Polar Connect is the Northern European initiative to acquire resilient connectivity through the Arctic to Asia (Japan) and North America for the Research, Development, Innovation (RDI), and Education sectors. 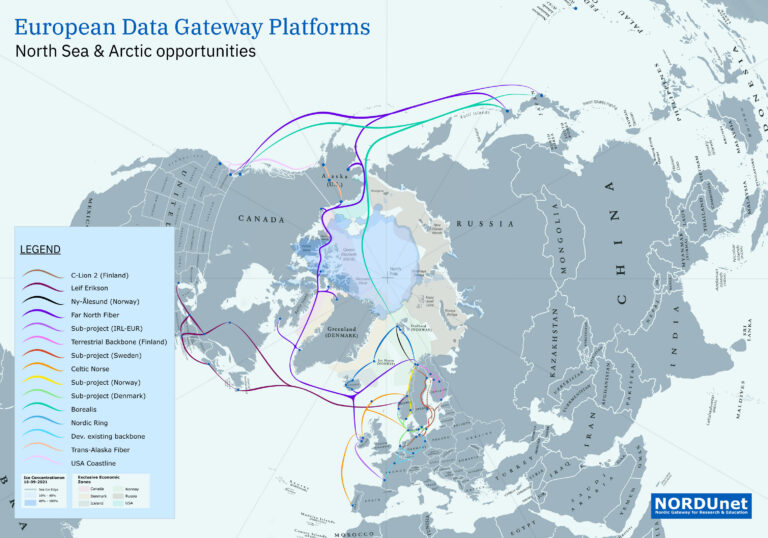 All R&E sectors are facing a data explosion, which means a rapidly increasing demand for efficient data infrastructures. Likewise the global lockdowns and remote education once more demonstrated the significance of digital infrastructures. In addition to addressing the increased capacity need of existing intercontinental collaborations, Polar Connect will spur new innovative collaboration models and support the rapid ongoing digital transformation.

The Arctic route from Europe to Asia and North America
The Arctic Ocean is unexplored territory for intercontinental subsea cables, though offers dramatic advantages for Europe and the Nordic countries. It offers a direct route to Japan, and it offers a much shorter connection to both Asia and the North American west coast, bringing digital autonomy, optimal connections between world-leading, green data centres, and an opportunity for economic growth opportunity to the Nordic countries.
Vision 2030

NORDUnet and the Nordic NRENs are looking into a number of initiatives to investigate and planning a first submarine cable system between Europe, Asia, and North America to secure a shorter route through the Arctic Ocean. An area  so far without any submarine cable systems, hence this unique route will dramatically increase resilience of Europe – Asia connectivity.

Two different specific solutions are being investigated.  A direct route passing under the ice sheet in the Arctic Ocean ice close to the North Pole, and an alternative route through the North-West Passage between Greenland and Canada. A submarine cable system directly through the North Pole would be shorter and thereby minimize latency, however, also more complex in terms of technology and thereby somewhat further into the future. We call this vision 2030. 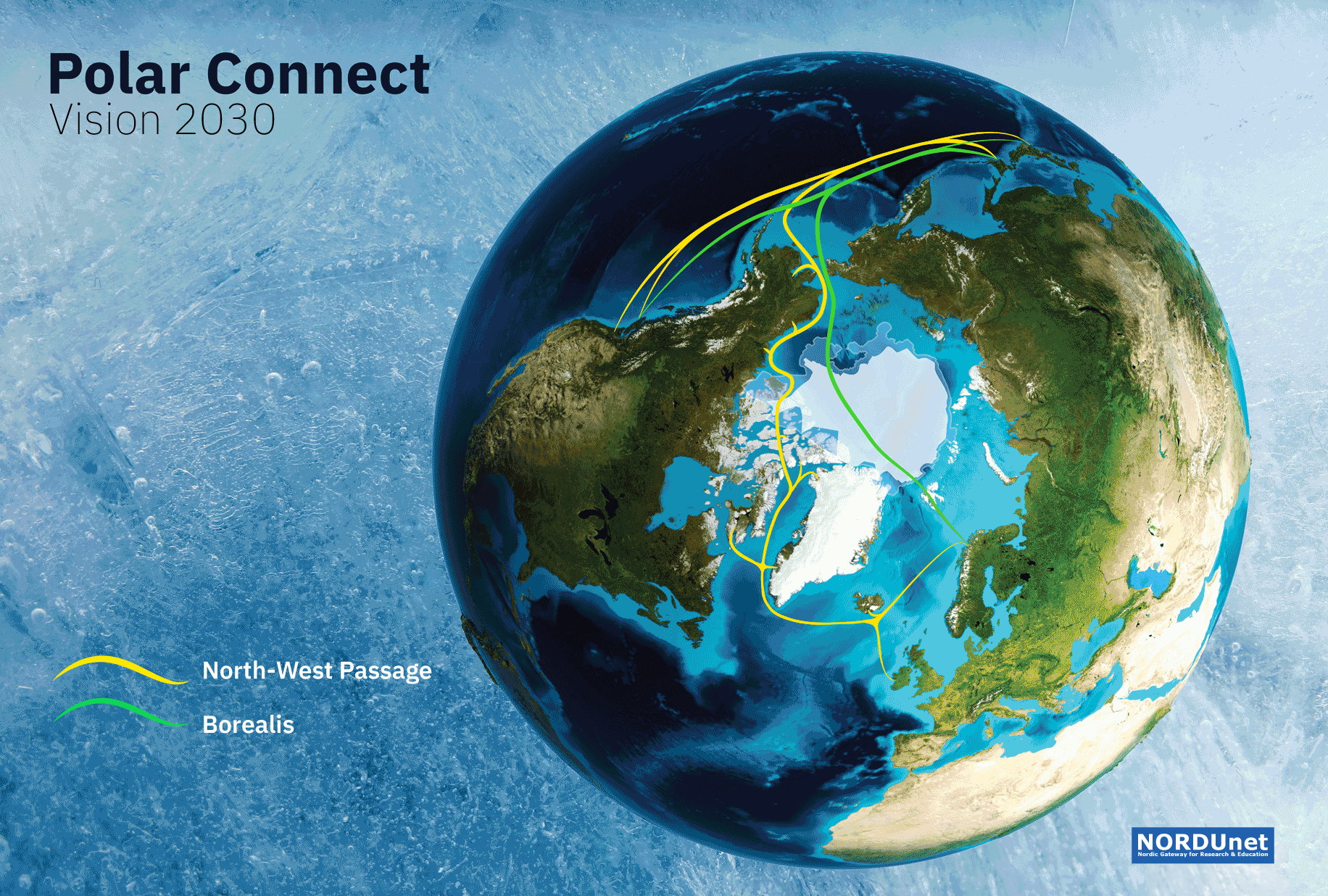 Major European involvement in these initiatives will substantially strengthen European digital autonomy. By being early partners in such initiatives, we aim to secure capacity owned and managed by the research and education communities, adding huge benefits in terms of cost, bandwidth and latency. The ultimate goal of Polar Connect is to have at least two such routes for increased resilience.

Europe should not become an island in the digital ocean. Implementing the vision of the European Data Gateways Declaration means taking control of Europe’s digital destiny. The Northern European Digital Gateway is a cornerstone in securing Europe’s digital sovereignty as it promotes new and redundant paths towards Asia and North America through the Arctic area.

Polar Connect will be a strategic investment into fundamental digital infrastructure that will support and advance regional development of the Nordics and Northern Europe. Additionally, it will connect all of the European R&E networks and thus support European RDI & Education sectors and it will contribute to European post-COVID-19 economic recovery.
The Economic Value of Submarine Cables in the Arctic

The report The Economic Value of Submarine Cables in the Arctic  from Copenhagen Economics highlights the benefits of submarine cable systems through the Arctic region; Such systems will bring resilience, mitigate digital congestion, improve sustainability, and induce more than 1 billion EUR worth of economic benefits to the Nordic region.

The report looks into the societal and economic dividends from such investments which could be large. The report was commissioned by NORDUnet and the five Nordic national research and education networks (NRENs).

Close to 90 % of Europe’s Internet traffic takes place through the connections which link London, Amsterdam, Frankfurt, and Paris. Alternative routes are badly needed to prevent congestion, reduce latency, and increase resilience, not least since the world’s total Internet traffic continues to double every three years. Notably, an increasing amount of the traffic is intercontinental, for instance between Europe and Asia.

The demand for renewable low-carbon energy is constantly growing in Europe. It will always be cheaper and more efficient to move as much consumption as possible closer to where the energy production takes place. To host data centres in the North is efficient as it is more efficient to move bits than energy. However, this can only be done if these data centres are well-connected to both Europe and other world regions.

The Copenhagen economics report also points to  other societal benefits, leading to a significant GDP boost in the region:  “There will be new jobs associated with the location of data centres and associated support services, but more importantly, the improved connectivity associated with a strengthened network from the Nordic region will provide new local business opportunities and increased productivity and trade (…) We estimate that an Arctic cable, for example, to Japan, could boost GDP in the Nordic region by more than EUR 1 billion annually if fully utilized.”

You can learn more about the report here, or you can download the entire report from the Copenhagen Economics website.
Webinar on polar connectivity between Europe and Japan

On 5 October 2022, NORDUnet hosted a Polar Connectivity Webinar focusing on fibre connectivity between Japan and the EU. The webinar feature speakers from Europe and Japan.

The presentations were followed by a panel discussion where the speakers where joined by three industry experts to exchange views on the known and planned international connectivity projects from the Nordic / Arctic region and their impact. The panelists were:

The webinar wad recorded and the recording will be made available at a later time.